Wouldn’t it be great if all the pictures you took on your iPhone could be viewed on your other devices without having to mess around with cables and copying and pasting? Just imagine, you could take a photo on your iPhone and then view and edit the photo on a bigger screen–like an iPad–without having to sync to iTunes or having to constantly email pictures from one device to the next. With Photo Stream, you can do this and so much more!

A few months ago we explained how to create and manage photo albums using only your iPhone. You can find that article by clicking here. Now we are going to move on to how you can use Photo Stream (1) to back up your photos, (2) to view your photos on your other Apple devices, and (3) to share your photos with friends and family.

Photo Stream is an amazing feature that allows you to do several things. First, Photo Stream operates as a way to do a limited backup of your photos. I say “limited” because Photo Stream won’t permanently backup every photo you take forever. Rather, as stated by Apple: “[i]f you have Photo Stream enabled on your iOS device, every single photo you take appears in a special Photo Stream album that holds your last 1000 photos.”1 However, the length of time your photos are stored on iCloud is limited because “iCloud [only] stores new photos for 30 days.”2 Second, Photo Stream makes it easy to share photos between your iPhone, iPad, supported iPod, and Mac computer with iPhoto installed. Finally, Photo Stream makes it easy to share photos or photo stream albums privately with friends and family or publicly with everyone. All of these features make your life easier and cost nothing to use! Now let’s get into the “how-to”.

As this is a longer post, I have included a mini table of contents here. Clicking a link will take you to that section of this post. In a follow-up post, we will go over how to use shared photo streams and how to print photos from your iPhone.

Turning Photo Stream on will allow you to do the limited backup of your photos (discussed above). To use Photo Stream, you must first enable it on your device. To enable Photo Stream, go into your “Settings” app.

Scroll down and tap on “Photos & Camera”. 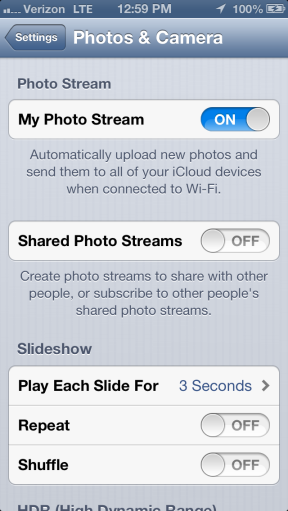 Once you have turned Photo Stream on, your iPhone will automatically begin to upload the photos in your camera roll to iCloud. It is important to note that your photos will not be uploaded to iCloud over a cellular connection. Rather, the photos can only be uploaded over Wi-Fi. This means that if you are away from Wi-Fi when you take the photos, the uploading of those photos will not begin until you connect to a Wi-Fi network.

Once your photos have been uploaded to Photo Stream, you can view them on any of your devices that has Photo Stream enabled. To view your photo stream on your iPhone, open your “Photos” app.

Deleting Photos From Your Photo Stream

While in your “Photos” app, tap on the “Photo Stream” button at the bottom.

Next, tap on “My Photo Stream”.

Tap on “Edit” in the top right. This will allow you to select the photo or photos that you want to delete. When you select a photo, the photo will get grayed out and a red circle with a checkmark in it will appear on that photo. 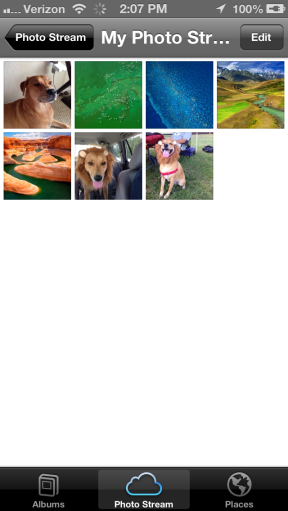 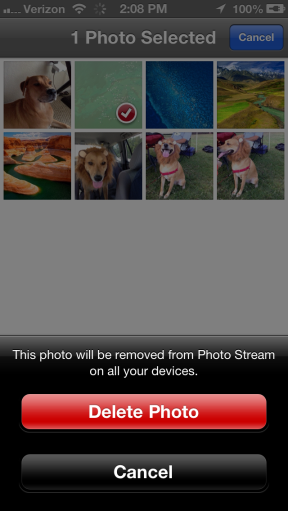 Method 1: Only a Few Photos

When you are dealing with only a few photos that show up in your photo stream (or someone else’s photo stream), first tap on the photo. 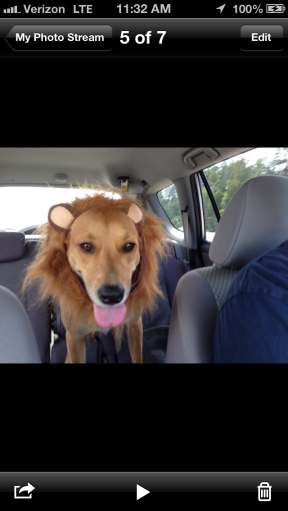 Next, tap on the button on the bottom left of the screen that looks like a box with an arrow coming out of it. (If you do not see any buttons on the screen, simply tap once anywhere on the screen and the buttons will appear.) 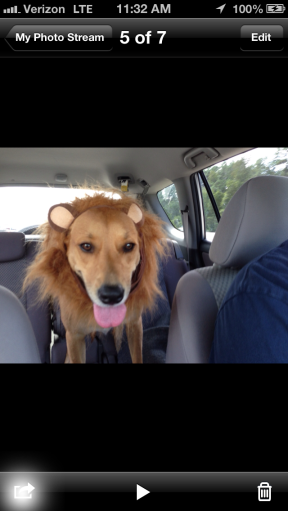 Here you will be presented with all of the options you have when it comes to the photo. As you can see, you can tap on one of the icons to do such things as as sending the photo in an email, picture message, to your photo stream, to your Twitter account, or to your Facebook profile; you can print or copy the photo; and you can save the photo to your camera roll. Just tap the button that represents what you want to do with the photo. (Note: Printing from your iPhone will be discussed in a future article that will appear here as a link once it is posted.)

When you are dealing with a lot of photos, go to your photo stream and select the “Edit” button on the upper right of the screen. 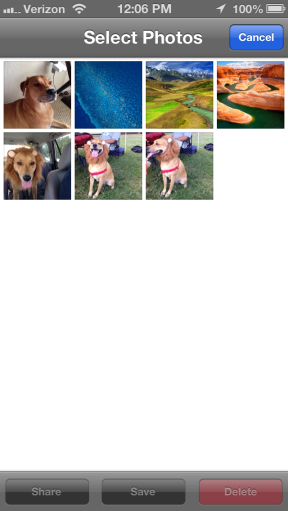 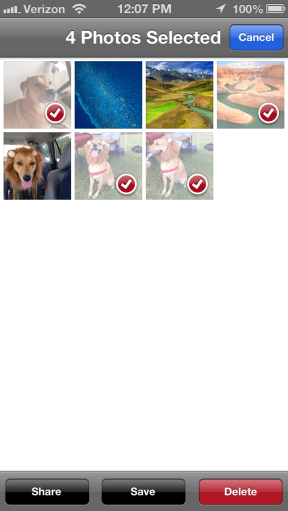 To save the photos to an album, tap on “Save”.

You can save the photos to an existing album (if you have one) or to a new album. If saving to a new album, you will have to enter a name for the new album and then tap the “Save” button. 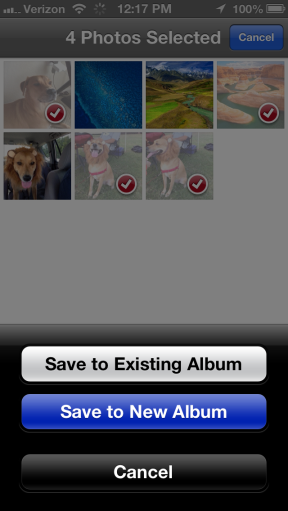 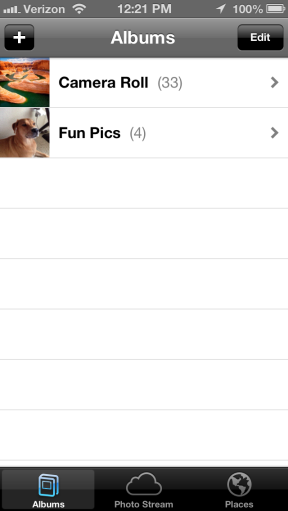 Now go out, take some pictures, and use Photo Stream to make the photos you snap on your iPhone available on your other devices!